Home » How To Watch UFC Without Cable
Sports If you’re wondering how to watch UFC fights (R) we have you covered. The best way to watch UFC fights without broadcasting restrictions is with ESPN and ESPN+. MMA fans can watch top fighters like Conor McGregor, Kamru Usman, Francis Ngannou, Israel Adesanya, Stipe Miocic, and more.

The UFC has two main types of events: UFC pay-per-view (PPV) and UFC Fight Night. For many years these broadcast rights belonged to 21st Century Fox; however, in 2019 the UFC struck a 5 year, $1.5B deal with ESPN networks to broadcast UFC events. ESPN will retain rights until 2025.

UFC cord-cutters can order pay-per-view (PPV) events and fight nights through the streaming platform ESPN+. Prelims are aired on ESPN which can be accessed through several different streaming platforms. Title fights are typically aired on the PPV TV package. UFC fans can also get UFC Fight Pass to stream fight nights and old fights. 2022 is shaping up to have some monster UFC pay-per-views and UFC Fight Night. Here is a list of upcoming UFC events for sports fans:

How Can I Watch UFC Fight Night?

The best ways to watch UFC are the following services. Please note that PPVs are only available through ESPN+.

ESPN+ is a subscription streaming platform that offers sports content from MLB, NFL, NCAA, MLS, UFC, Top Rank Boxing, and more. This service is the home of UFC pay-per-views (PPV) and UFC Fight Nights. Users get access to past UFC fights.

The live tv streaming service is one of the least expensive available costing $6.99/month or $69.99/annual. You can also bundle it with Hulu and Disney Plus for $13.99/month. Learn more about this special bundle.

ESPN+ can be accessed and viewed on several different streaming devices such as Amazon Fire TV, Apple TV, Roku, Google Chromecast, smartphones, smart TVs, internet browsers, and more. This means you can stream UFC fights at home or on the go.

Existing subscribers can buy the latest UFC PPV events by going to this page and selecting “Buy Now”. You can upgrade your monthly plan to the annual plan and receive the 25% savings by choosing “upgrade and buy” if you’re logged in.

This is a standalone streaming service that offers exclusive deals for a variety of live sports, including UFC content, NHL, boxing, tennis, and hundreds of college football and basketball games.

Please visit our ESPN+ guide to learn more about the service or visit the ESPN+ site. 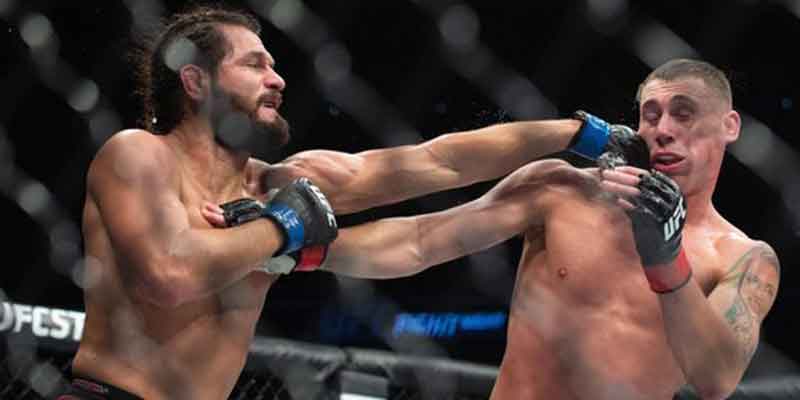 Fight Pass users have access to the Early Prelims from the biggest UFC Pay-Per-View cards along with over 200+ live events from promotions such as Invicta FC, GLORY Kickboxing, QUINTET (Team Submission Grappling), Eddie Bravo Invitational, Polaris, and many more.

The Ultimate Fighting Championship Fight Pass library contains every fight in the history of the UFC, as well as the entire video libraries of over 30 other MMA/boxing/kickboxing/Muay Thai/Jiu Jitsu promotions including PRIDE FC, WEC, Strikeforce, and Invicta FC. There are also thousands of hours of archived historical MMA programs and tv shows to stream including previous seasons of The Ultimate Fighter, Dana White’s Tuesday Night Contender Series, and exclusive newly-created shows.

Other Ways to Watch UFC

SlingTV won’t get you PPVs but it does carry ESPN which will give you access to UFC prelims. This is great for UFC fans looking to watch the early action.

SlingTV offers the Sling Orange and Sling Blue plans. Both streaming plans cost $35/month or you can get Orange + Blue for $50/month. The Sling Orange plan includes ESPN which is where you find UFC prelims.

Please visit our SlingTV guide to learn more about the service or visit the SlingTV site.

1. How To Watch the UFC Without Cable

You can watch UFC fights without the cable tv subscription using an over-the-air antenna, streaming services like Hulu, SlingTV, or other streaming platforms like ESPN+ and DirecTV steam service.UFC is a mixed martial arts (MMA) event that is broadcasted by the Ultimate Fighting Championship. UFC events take place in different countries and cities around the world.

2. How do I watch UFC on FireStick?

With the UFC app on your FireStick, you will be able to watch Fight Pass on your device.
To begin your search, select Find and then Search from the FireStick’s home screen.
Select Ultimate Fighting Championship Fight Pass at the bottom of the virtual keyboard by typing UFC.
Select UFC from the Apps & Games section.
Once the installation is complete, click the icon to launch the application.

Yes, you can. ESPN+ subscribers can watch the UFC fights on Hulu. Hulu users (or those who have purchased The Disney Bundle) can watch live sporting events such as Ultimate Fighting Championship Fight Night on ESPN+, as well as game replays, sports exclusives, and Emmy®-nominated documentaries such as 30 for 30.

4. How much does ESPN Plus cost?

Yes, you can watch UFC online on Youtube TV. You need to sign up for the service and pay $40 per month to access it.  UFC, or Ultimate Fighting Championship, is a mixed martial arts event. It was founded in 1993 and was originally owned by the Fertitta brothers.

Watch Other Sports Without Cable

Watching your favorite NHL teams and hockey games without a cable TV subscription is super easy. For the upcoming NHL season, there are many numerous options available for nearly all types of cord-cutter out there.

Streaming soccer games online without cable is incredibly easy. It is possible to stream live coverage of soccer games from different leagues around the world. You can stream soccer games from Bundesliga, English Premier League, Italian Serie A, LaLiga, Ligue 1, and MLS.

You can watch live NBA games without a cable TV subscription by using a live TV streaming service or by signing up for NBA League Pass. You can watch basketball games on several devices including smartphones, computers, streaming devices, smart TV, and more.

Sports fans can watch the big games on popular streaming devices such as Apple TV, Amazon Fire TV, Google Chromecast, Roku, smart TVs, smartphones, tablets, laptops, computers, and gaming consoles. Most sports services also offer simultaneous streaming and DVR so you can record or watch the game while someone else in your household watches something different.

How To Watch Atlanta Falcons Live Online Without Cable in 2022