ESPN+ is a subscription over-the-top video streaming platform. The service is primarily an add-on subscription on top of ESPN’s core linear networks. This is a no-contract streaming platform that delivers on-demand video and premium sports content through an internet connection either through the ESPN app or through the ESPN website (R). It requires no installation, there are no extra fees, and you can cancel anytime.

The subscription service is one of the least expensive available costing $6.99/month or $69.99/annual. You can also bundle it with Hulu and Disney Plus for $13.99/month. Learn more about this special bundle. This is not a primary source to watch ESPN channels but it does carry a lot of ESPN content.

For decades, ESPN has been the most popular network and brand in sports television. With this service, subscribers will get access to thousands of live sports events plus a library of ESPN’s original sports-oriented film content such as 30 for 30. Users also get access to written analysis from ESPN’s top analysts such as Mel Kiper and Todd McShay and also exclusive fantasy sports content. This service caters to a wide variety of sports fans. MLS fans will get the entire MLS out-of-market schedule with exclusive local-market coverage of the Chicago Fire. MLB and NHL fans are treated to a daily out-of-market broadcast every day.

MMA and boxing fans will be delighted because the service offers Top Rank boxing and is the home to several exclusive UFC events including fight nights and pay-per-views.

How Much Does ESPN+ Cost?

ESPN+ offers two subscription tiers. Subscribers can pay monthly or annually. The plans cost $6.99/month or $69.99/annual. Currently, you can also bundle Hulu and Disney+ for $13.99/month. This is one of the most economical ways to get sports and entertainment content.

What isn’t included is normal ESPN cable channels. This means you will need to find a service that offers ESPN as part of their channel line-ups such as Hulu with Live TV or Sling TV. Despite not having a large offering of live sporting events, ESPN+ is an MLS fan’s dream. You can watch the entire MLS LIVE out-of-market schedule as no extra charge. ESPN+ offers live sports. There are thousands of games and events from professional leagues and international sports as well as college sports from nearly two dozen conferences across the country, including: 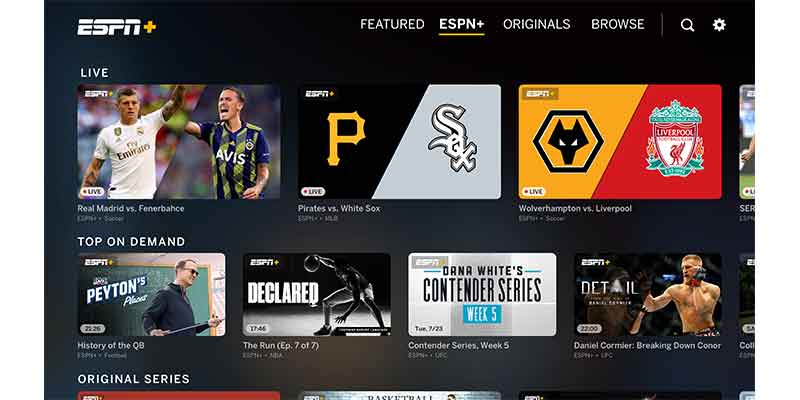 An unmatched sports archive featuring thousands of hours of on-demand programs and past sporting events. At launch, this includes:

ESPN+ exclusively features UFC Fight Nights and UFC pay-per-views. UFC fans will need to have an ESPN+ subscription to access these events making it a must-have for any UFC fan. The service also includes UFC fight replays. This includes 100+ total fights, including early prelims and main-card events.

Also available are original content such as Dana White’s Contender Series and Ariel & The Bad Guy. You can experience UFC like never before with ESPN’s award-winning editorial coverage, including Ariel Helwani’s combat sport studio show.

Follow the journeys of your favorite UFC fighters with replays of classic UFC fights. This service has an extensive on-demand video library. This service is supported by a wide range of devices. Supported platforms include:

ESPN+ is not compatible with Nintendo, VIZIO Smart TV, and LG Smart TV. However, you can use the built-in Chromecast feature on VIZIO Smart TVs.

Other ESPN+ Features and Information

ESPN+ is a great app but there are some important things to know about it. The platform is not available outside of the US. You can try to use a VPN to bypass geoblocking restrictions but ESPN does consider this to be against their terms of service for rights reasons.

The next thing to know is that ESPN+ does not offer SportsCenter, Monday Night Football, or NBA games. To use the platform you must access it through the ESPN app which requires you to download it or update it. We believe that this platform is best used in conjunction with a streaming service, such as Hulu + Live TV and Disney+.

The video quality is pretty good. Playback is in 60 frames per second on just about every single device. That means crystal clear HD quality streaming with little to no buffering. Currently, there is no 4K support for on-demand or live streaming. You can also stream simultaneously on 3 different devices at the same time. There is no DVR option available.

After years of waiting for ESPN to release a standalone subscription service, it finally arrived in 2019. ESPN+ is a mix of live streaming content, on-demand content, and more. The service may leave some people wanting more as it lacks popular programming such as SportsCenter and Monday Night Football but it does contain a large library of original programmings such as 30 for 30, daily MLB and NHL games, every single MLS game, and content from a wide variety of other sports such as tennis, golf, and even UFC pay-per-views.

ESPN+ does not have its own app, it must be accessed within the ESPN app which feels a little weird. The interface is very clean and the stream quality is excellent. While users may be slightly disappointed it does not contain full access to live ESPN programming it does provide a large volume of content and gives sports fans an incredible value for the price. We definitely recommend this service.