CBS All Access (R) is an over-the-top subscription streaming video on demand service. All Access is owned and operated by CBS Interactive. It offers content from the CBS broadcast properties and content from the ViacomCBS and Paramount film’s library. With this service you can watch National Football League games or popular TV shows such as The Big Bang Theory and Blue Bloods. Live streaming is available in over 200 markets.

All Access offers original content, content newly aired on CBS’s broadcast properties, and content from their library, along with live streaming of the local CBS affiliate’s main channel, (where available) that delivers live television through your internet connection to devices such as computers, tablets, smartphones, or streaming devices. It requires no installation, there are no extra fees, and you can cancel anytime.

The expanded service will include content from MTV, Nickelodeon, Comedy Central, BET, and Smithsonian Channel, as well as a library of 30,000 television series episodes and up to 1,000 film titles from Paramount’s film and television divisions and CBS Television Distribution, and expanded live news and sports offerings. No pricing plan or firm dates for content expansion were disclosed, though a “soft [re]launch” will occur later in 2020. ViacomCBS will also continue to license its TV and film content to competing streaming platforms. 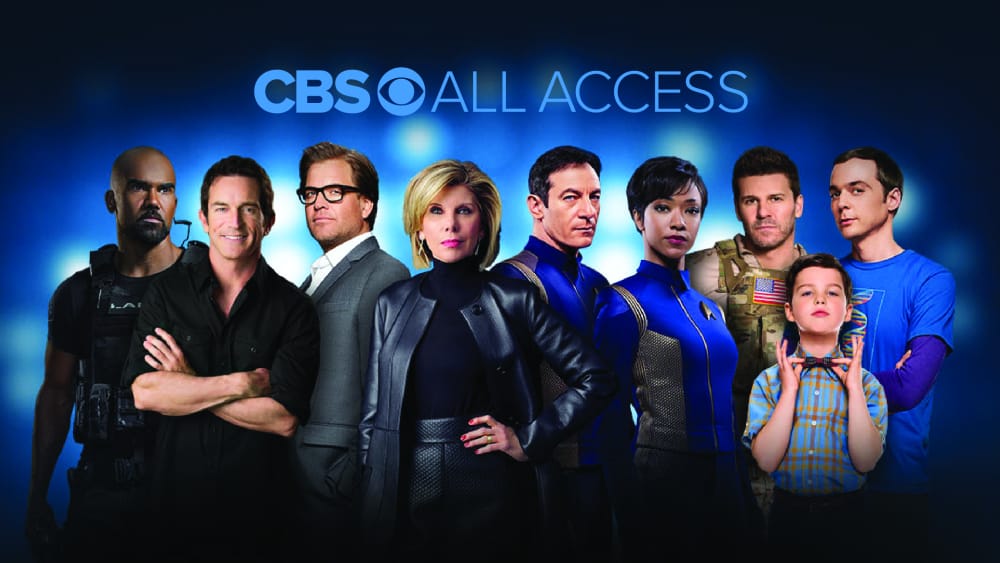 If you sign up for an annual subscription, to either plan, you will save 15%. All Access is one of the least expensive ways to watch live TV and live NFL games. CBS also offers a 25% discount to students. All Access offers two simultaneous streams at one time across multiple devices on either the Limited Commercial or Commercial Free plan. The service is mostly broadcast in 1080p and does not offer 4K or HDR resolution support. This is slightly disappointing because other services such as Netflix and Amazon Prime Video now offer 4K resolutions on some content. All Access has been fairly limited compared to competitors such as Hulu or NBC Peacock but the service has improved greatly over the last year.

Both of the subscription plans have the following features:

CBS All Access is lacking when it comes to sound features. A small number of devices support Dolby Digital surround. The rest of the titles resort to a two-channel stereo sound output. Some other services currently offer Dolby Atmos and Dolby Vision output. We hope this improves during the change to Paramount+.

The CBS mobile app features the ability to download up to 25 videos for offline viewing. These can be available on up to 5 different devices. CBS All Access will delete videos 30 days after you download them or 48 hours from after you start playback.

All Access now has parental controls. These settings allow you to lock potentially inappropriate content behind a four-digit code. CBS separates restrictions into four categories: All Kids (TV-Y, G, TV-G), Older Kids (TV-Y7, TV-Y7-FV, PG, and TV-PG), Teens (PG-13 and TV-14), and Adult (R, TV-MA, NC-17, UR, and NR). You can require account users to provide the PIN in order to watch live TV content. All Access gives subscribers access to over 17,000 TV episodes. This service primarily features programming from the and Viacom. However, All Access does not offer every single show that is broadcast on this network. Subscribers will get access to both live streaming and on-demand programming.

Recently, ViacomCBS content has been added to the service. This now means you can get access to content from popular networks such as BET, Comedy Central, MTV, Nickelodeon, Smithsonian Channel, TV Land, and VH1. Also added are more than 150 movies from Paramount Pictures which include titles such as “The Firm,” “Charlotte’s Web” and “Scary Movie.”

New in 2020-21 is new content and original programming such as Star Trek: Lower Decks, Big Brother Live Feeds, Star Trek: Discovery, The Untitled Richard Linklater Project, The Stand, The Man Who Fell To Earth, The Harper House, and Guilty Party. This service will also be home to Kamp Koral and The Spongebob Movie: Sponge On The Run. All Access is supported by a wide array of devices leaving subscribers with many options. Users have the flexibility to watch their favorite shows and movies in a variety of different ways such as at home on your television or on your phone while you’re on the go.

The following are supported devices: All Access is a great way to watch popular sporting events.

Subscribers will get access to live National Football League games. In fact, it’s one of the best values and methods for watching NFL games that air on CBS. Most AFC teams such as the Denver Broncos, Oakland Raiders, New England Patriots, and others are broadcast on CBS. This service will be airing Super Bowl LV on February 7th, 2021.

College football fans also love this service as many of the biggest SEC games are found on CBS. You will be able to watch top NCAAF teams such as Alabama, Georgia, LSU, and others.

CBS also broadcasts NCAA basketball including March Madness, PGA Championship, The Masters, and more. This is one of the least expensive ways to watch some of the most popular live sporting events without cable. Recently added to this service is Hockey East and the National Women’s Soccer League (NWSL).

CBS is America’s most-watched network but is very difficult for international cord-cutters to get. If you live in Europe, the UK, Canada, Australia, or anywhere else in the world then you will notice that content is geo-restricted. The good news is there is a way to get around this. International cord-cutters can access All Access using a Virtual Private Network (VPN) but it is very difficult. This service does not accept payment from non-US addresses, including PayPal. So if you want to watch All Access internationally you will need to find someone willing to share their American login credentials. If you are looking at using a VPN, we recommend using ExpressVPN.

All Access is a subscription video service that offers live tv and on-demand programming. Recently added content has really boosted the value and attractiveness of this service. This service carries many popular TV shows such as Star Trek and The Big Bang Theory. It also carries NFL games that are broadcast on CBS making it one of the least expensive ways to watch football and other sporting events. The service is very simple but very reliable and incredibly inexpensive. We absolutely recommend this service for anyone looking to get inexpensive exposure to the CBS lineup or NFL and SEC football games and other sporting events.